The family of Margaret (Peggy) Miller Day wish to announce that she passed away peacefully in the evening of October 5, 2013.

Peggy is survived by her stepsons, Wayne (Rene), Michael (Shelley); daughter-in- law, Delores; grandchildren, Mark, Nicole, Jason, Stephen, Brant, and Brynn; and great-grandchildren, Heru, Olivia, and Gisella; her nephews Gary (Heather) and Bryan and grand-nieces Brenda, Kristan, and Tara. She was predeceased by Louis, her husband of 30 years, her parents Peter Robert and Mabel (May) Miller, and her brother Robert (Bob).

Peggy was born on October 24, 1923, in Marshall, Saskatchewan where she completed high school, and subsequently lived in Edmonton and Vancouver. Peggy’s career started as clerk at the Federal Government Selective Service office in North Battleford in 1942 and continued to her retirement from the City of Edmonton in 1982. She joined the Department of National Defence as a switchboard operator at the Initial Training School with the RCAF in 1943 and then began her career in public broadcasting in 1945 joining CJCA as receptionist and switch board operator. She held a succession of positions with CJCA including Continuity Editor and Director of Creative Promotion and Community Relations. She transferred to a sister station CKWX in Vancouver in 1968 in the role of Director of Station Promotion and Community Relations. Peggy returned to Edmonton in 1972 and worked for the City of Edmonton’s Public Relations Deptartment retiring in 1982.

Peggy’s work and community involvements have been recognized through the conferring of a number of awards and honours. The City of Edmonton made Peggy a Honourary Citizen in 1968 for her efforts in promoting the City. She was the recipient of the Builder’s Award of the Yellowhead Highway Association, the Cheechako award of the Canadian Progress Club, and the Red Feather Society Award of the United Way. She was inducted into the Canadian Broadcaster’s Hall of Fame in 2005, and is a lifetime member of the Western Association of Broadcasters.

The family wish to express their gratitude to the nursing care team on Unit 6 East of the Robbins Pavilion at the Royal Alexandra Hospital for their compassionate care. Special thanks also to those from Palliative Care and Pastoral Services for their kindness and support.

In lieu of flowers, friends who so wish may make memorial donations to the Christian Children’s Fund, 1200 Denison Street, Markham, Ontario, Canada L3R 8G6, Christ Church (Anglican) 12116 – 102 Avenue, Edmonton, or to the charity of your choice.

Peggy was our Spring 2013 Luncheon speaker, and you can see more pictures of her by clicking here.

Peggy Miller’s introduction to the world of radio occurred early in 1945 in Edmonton when she became a receptionist and telephone operator at CJCA . Within a few short weeks, she was surprised to find that listeners would phone the station with all manner of strange queries. One day, for her own amusement, she expressed her amazement in a rhyme she wrote. Unbeknownst to her, someone sent it to Dick Lewis, proprietor of the trade magazine “The Canadian Broadcaster”. He published it. Fate took over.

CJCA management, recognizing that they had within their midst a budding if not a gifted creative talent, moved Peggy from Reception to the Continuity Department, and she  soon was writing scripts for programs and commercials for sponsors. It wasn’t much later that she was appointed Continuity Editor. That opened the door to Manager of Commercial Production, and Community Liaison. In the latter capacity, Peggy worked on CJCA’s behalf with a number of community organizations – promoting their good causes, and, even for several of them, sitting on committees .

All the while, Peggy was becoming recognized among her associates at CJCA as a lyric writer. Comic ditties were created for any special occasion around the station. Her unique creativity reached the ears of Harold Carson at the head office of Taylor, Pearson and Carson Limited in Calgary, at a time when he was planning his annual meeting with his radio station managers from across Canada.  He asked her to create an “after dinner show” that would entertain his executives. This involved Peggy researching the careers of the attending broadcasters for “send-up” material.

Later, she found herself involved in writing and directing similar “after banquet” shows at Western Association of Broadcasters’ conventions, and at general meetings of the Canadian Associations of Broadcasters. Two of her regular “star performers” were Dalt Elton (CJOC/CJCA/CKWX) and George Brown (CJOC/CFAC), both accomplished singers, with several appearances by Bill Walker (CKRM/CKRC), Orv Kope (CHAT), Alden Diehl (CJCA/CKLG) and Conrad Lavigne, the popular radio/TV entrepreneur of Northern Ontario. Harry Boon (CJVI/CJCA/CKWX) was usually in charge of music. Of all of the broadcasting-oriented lyrics that Peggy composed, the best known was “Up Your B.B.M.”.

Apart from broadcasting, Peggy wrote the lyrics for the Eskimo Football Club’s “Fight Song” which continued to be sung at all home games. She was also asked to come up with words for a football song for the B.C. Lions, which she did – “Roar Lions, Roar”. Both were recorded by Canadian Talent Library, along with other CFL songs.

In 1968, while continuing her involvement with the WAB and the CAB, Peggy moved to CKWX in Vancouver as Manager of Station Promotion. Even after retirement with her husband, Louis Day,  in Edmonton, her relationship with the broadcasting industry continued well into the 90s.

In 1998, Peggy helped to found the Edmonton Broadcasters Club and chaired the
coordinating committee. Semi-annual get-togethers were begun to give long-time broadcasters an opportunity to renew acquaintanceships with colleagues and friends, and to make new ones. By 2004, the club could boast of having over 100 members. 2005 saw the year that the club established its own website -(www.edmontonbroadcastersclub.ca)

In 1964, Peggy Miller was named by the Western Association of Broadcasters their First Lady Honorary Lifetime Member.

Peggy Miller was inducted into the Canadian Association of Broadcasters Hall of Fame in 2005.

Dynamo behind Eskimos’ Fight Song boosted Edmonton at every turn

Miller-Day wrote the famous anthem in the early 1950s, a few years after the team’s founding. The song is still sung at home games at the end of the third quarter by Bryan Hall, including last Saturday, the day his former colleague Miller-Day died at the age of 89.

“You know what football is, it’s all about marching bands, rah rah rah and fight songs,” said Hall. “So she wrote the fight song.”

Born Margaret Miller in 1923 in the hamlet of Marshall, not far from Lloydminster, Sask., Miller-Day arrived in Edmonton in 1943. After two years working the phones for the Royal Canadian Air Force, she moved to what appeared to be an identical gig at CJCA, a local radio station.

Those switchboards inspired in Miller-Day a rhyme, I’m a Little Plugger. Her quick wit caught the attention of her higher-ups, who roped her into writing songs, copy and scripts. She would go on to pen skits and plays, in addition to producing, announcing and running promotions.

“Being at the station during radio’s ‘glory years,’ before television entered the market, was an experience for which I shall always be grateful,” she wrote in 1994, shortly after the station went off the air.

Edmonton was booming after the Second World War, and Miller-Day promoted everything the city had to offer: the Eskimos, the Chamber of Commerce and the United Way. She was instrumental in the founding of Klondike Days, wearing the traditional Klondike Kate garb on Air Canada’s first direct flight to London in 1966.

She was pals with Edmonton’s vibrant musical theatre community, wrote tunes with jazz pianist Tommy Banks, including That’s What You Need, a civic booster later recorded with a full orchestra.

“She was involved in every civic thing in Edmonton that ever happened for decades,” said Banks. “Because of that, everybody went to get her involved in everything. She went 200 miles an hour all the time.”

Miller-Day knew little about football before she wrote her famous “fight, fight, fight” imperative to a well-known football march, Washington and Lee Swing. She later remarked she’d thought huddles were for joke-telling. But by 1954, she was asked to accompany the team to the Grey Cup in Montreal, where she wrote new songs for the team, including a victory tune for when they squeaked out an upset. Her knack for lyrics led the B.C. Lions to ask her to write their halftime theme, Roar Lions, Roar, which the team eventually adopted as the anthem.

“She’s a human dynamo; that girl has imagination to burn,” Eskimos president Walter Sprague said in 1964.

An exuberant promoter of Edmonton and the fledgling Klondike Days, Miller-Day was so revered for her promotional skills in a male-dominated field that when she announced she was leaving for a public relations job at CJCA’s sister station in Vancouver in 1968, the city presented her with a key to the city, a first for a woman. Media and public relations personnel gave her 100 white carnations at a surprise party.

“I’m desolate at leaving Edmonton,” she said at the time. “I’ve been welcomed into a circle of shakers and movers here.”

The departure wasn’t long-lived. Miller-Day returned to a public relations job with the City of Edmonton in 1972, and by the next year, had risen to become the city’s first female department head. In 1974, she transferred to the fire department where she met fire chief Louis Day, her husband for 30 years until his death in March 2012. Miller-Day joined mayor Cec Purves’s public relations team in 1978.

It wasn’t easy being a working woman in those days, but Banks and Hall both say she refused to cede any ground, echoing a sentiment Miller-Day expressed 40 years ago.

“Business is a man’s world,” she said in 1973. “You really, really had to prove yourself because you were a woman in order to gain the trust to do the job.” 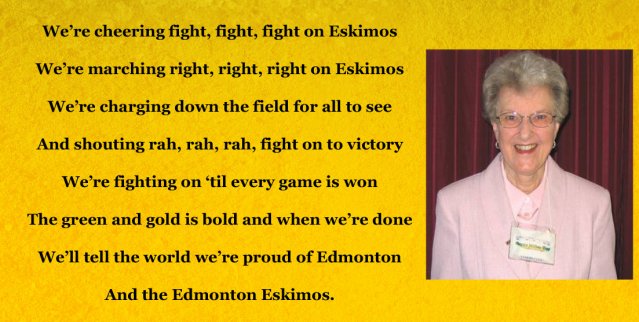 The Edmonton Eskimo Football Club is saddened by the passing of the Eskimo Fight Song creator Peggy Miller-Day on Oct.5 at age 89 after a short illness.

In 1952, Miller-Day wrote the famous song that Eskimos fans have made a tradition of singing loud and proud at each home game at the start of every fourth quarter.

Miller-Day’s broadcast career began at CJCA Edmonton in 1945 when she was a receptionist/telephone operator. She then moved into the continuity department where she wrote scripts and copy for programs. Peggy Miller-Day then became a continuity editor, manager of commercial production and community liaison.

In 1964, Miller-Day became the first lady to be named an Honourary Lifetime Member of the Western Association of Broadcasters.

Upon retirement, Miller-Day co-founded the Edmonton Broadcasters Club in 1998. In 2005, Miller-Day was given the honour of being inducted into the Canadian Association of Broadcasters Hall of Fame.

On behalf of the entire Eskimos organization, we send our deepest condolences to Peggy’s family.