June passed away peacefully after a brief illness. As the wife of Edmonton’s former Mayor and City Councillor Terry Cavanagh, she enjoyed a colourful and exciting life. June was active in working with many local organizations and charities. As promotion Manager for CJCA Radio, she met people from all walks of life, had a wonderful time planning and executing many special events. June also sat on Edmonton’s City Council from 1980-1983. She was a huge supporter of Northlands, The Edmonton Eskimos and the Oilers.

June will be missed and lovingly remembered by her husband of 67 years, Terry, and their daughters, Gay (Ron) Coyle and Valerie (Dennis) Fitzgerald.

June was predeceased by her son Terry (Leslie) in 2012, and her very special mother Evelyn in 1995.

A special thank you to the Grey Nuns staff at unit 51 and her caregivers at Rutherford Heights Seniors Residence.
Cremation has already taken place.

There will be a private family celebration of her life at a later date. 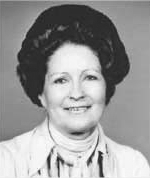